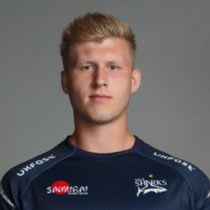 For two seasons Matt plied his trade in National 2 North with Sale FC as a dual registered player from Sale Sharks. He added not just height but a solid pair of hands to the Sale FCUndde pack creating options at lineouts.

Matt played his formative rugby at Ilkley Rugby Club from the age of five in the under 6’s all the way up to Colts rugby.

He played his school rugby at Ilkley Grammar School which has strong links to Ilkley Rugby and from there went on to representative rugby.

Outside of school and club Matt has played representative rugby both at Under 15 and Under 18 for Yorkshire.

Having played for Sale FC since the age of 18, Postlethwaite entered his fifth season at the National Leagues in 2019 and has also made a breakthrough to the Sale Sharks side, playing in three of the clubs Premiership Cup games that opened up in the 2019 season.