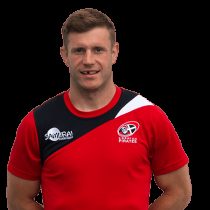 Matt Evans is known to be a highly versatile player, capable of playing fly-half, wing, centre and full-back. He currently plays for the Cornish Pirates in the RFU Championship. He broke onto the international scene in 2008 when he represented Canada's U20 side, which resulted in his full Test bow that same year against Ireland. Evans went on to represent Canada at the 2011 Rugby World Cup. The utility back had short spells at Newport RFC and Newport Gwent Dragons before joining Cornish Pirates in 2011. In 2015 he was selected to represent Canada at the 2015 Rugby World Cup.

In five years with the Pirates Matt has been a prolific try-scorer, and on his return from the 2015 Rugby World Cup took his games tally to 86 by the end of the 2015/16 season.

Matt, who joined the Pirates in 2011 and is now 29 years of age, is just two games short of the 100 games milestone. Matt signed with the Cornish Pirates for the 2017/18 season.