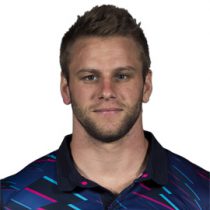 He made his first appearance with the senior professional team FC Grenoble in the Pro D2 in 2010 when still only 18 before moving to Bayonne in 2011.