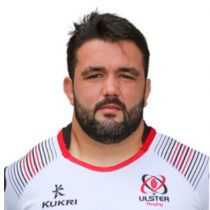 Born in Dublin, Moore attended Castleknock College and represented Leinster & Ireland at various age grades including the U20's during the 2011 U20 Six Nations Championship.

Moore made his debut for his native province in April 2012, he went on to make 58 caps for Leinster, many of which during Jono Gibbes' tenure as forwards coach.

He has won 10 caps for Ireland since making his international bow in February 2014, against Scotland in the Six Nations Championship. He was part of Ireland's Six Nations title-winning squads in 2014 & 2015.

Soon after being selected for the 2016 Irish Six Nations squad, Moore joined Wasps from the 2016/17 season.

Moore was not included in the Ireland squad for the 2016 November internationals despite featuring prominently before his high profile move from Leinster.

In November 2017, Wasps confirmed that Marty Moore will join Ulster Rugby ahead of the 2018/19 season. The tighthead will join on a two-year-deal and the move will see him link up with two of his former coaches.

In each game that he had appeared in for Ulster in the 2019/2020 campaign, he had started every game making an average appearance of 51 minutes per game.