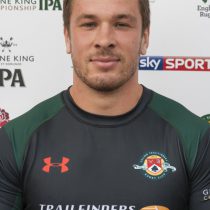 Peters hails from Portsmouth and he was previously part of the London Irish Academy before he moved to Leeds to study Quantity Surveying where he was taken on at the Carnegie Academy.

He helped Leeds Beckett to victory in the final of the 2015 BUCS Final.

Peters was one of three players to sign on with Ealing Trailfinders for the 2016-17 season after he completed his studies at Leeds Beckett University.