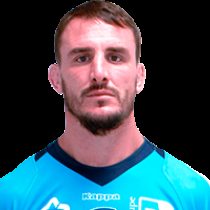 Picamoles began his club career at Montpellier in 1999 in the underage set up and played for the club for ten years before a move to Toulouse in 2009. At Toulouse, he made his name as a powerful back row operator, most notable for big runs off the back of the scrum. His pace and size make him a daunting prospect for opposing teams, with him regularly making clean line breaks.

For a man of his size he also has surprisingly good hands, and regularly leads the off loading stats for club and country. In 2008, while still playing for Montpellier, Picamoles received his first call up to the national side, making his debut in a 26-21 victory over Ireland.

Since his debut, barring injury, Picamoles has been a mainstay in the French squad, without ever nailing down a starting berth. He was an unused member of the Grand Slam winning squad in 2010, and made only three sub appearances in the 2011 Rugby World Cup.

In 2013 and 2014 he made almost no appearances for the French side, before finally being recalled in 2015 for the Six Nations Championship. More impressive showings for his club Toulouse towards the back end of the 2015 season saw him named in France's final 31-man squad for the 2015 Rugby World Cup in England.

Louis' arrival at Franklin's Gardens for the start of the 2016/17 season was announced in November 2015. In May 2017, Picamoles announced that he would be leaving Northampton to rejoin Montpellier, his first professional club.

Picamoles was a surprise exclusion from the France squad for the 2018 Six Nations, but was recalled ahead of the second round of the competition following an injury to Kevin Gourdon.

He fought back into the squad before confirming that the Rugby World Cup in Japan would be the end of his test career.

His final game against Wales was his 82 and final game for France. He started 62 times for France scoring 10 tries in his 11-year long international career.

He also captained his country for the first time against USA in the pool stages of the World Cup.