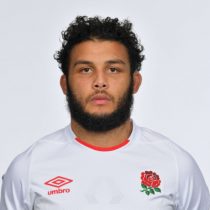 Lewis Ludlam was born in Ipswich and attended St Joseph’s College in the town. His rugby career began at Ipswich Rugby Club and also went on to join Colchester RFC. Despite being released by the club a few years ago, his tenacity and talent not only led to him regaining a place in the Saints Under-18s, but he moved up to the Senior Academy full time.

Originally a centre he has found a home in the back row for both club and country. A junior international, he was awarded the Man of the Match award on his England Under-18 debut and was named England's Player of the Tournament in the 2015 World Rugby Under 20 World Championships when they made the final. He started four matches and produced an outstanding performance in the final against New Zealand at Cremona.

Breaking into the first-team squad in the 2016/17 season during the Anglo-Welsh Cup, Ludlam helped the Wanderers lift the Aviva 'A' League trophy, defeating Gloucester United in the final for the title.

Ludlam, who began as a centre before moving into the back row, made his full Premiership debut in the first game of the 2017/2018 season against Saracens in the London Double Header at Twickenham, scoring his first senior try for the club.

He has since progressed into a first-team regular, reliable lineout option and a breakdown scavenger, the back-rower saw plenty of game time during the 2017/18 season.

He earned a further 4 test caps at the Rugby World Cup, including an appearance from the bench in the quarter-final win over Australia. He has made over 40 appearances Northampton Saints ahead of the 2019/20 season, including 9 in Europe.

He was included in the England squad for the 2020 Six Nations, performing admirably.

In November 2020, he was named as co-captain of Northampton Saints alongside Alex Waller.