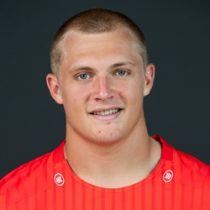 A powerhouse tighthead, Knox showed plenty of promise and captained his school's first XV in 2017.

Knox was a standout for the Sharks during the provincial under-18 Craven Week which caught the eye of Munster who signed the youngster to their Academy before he finished school.

Upon finishing school in 2017, Knox made the trip to Cork and linked up with Munster's Academy and featured in all five of Munster A's fixtures during the 2018–19 Celtic Cup and signed a three-year contract with the province in February 2019, which saw Knox complete year three of the academy before progressing to the senior squad.

Because Knox joined Munster's academy before 31 December 2017, he will qualify for Ireland based on residency in 2020. He made his senior competitive debut for Munster on 28 September 2019, featuring as a replacement in the provinces opening 2019–20 Pro14 39–9 win against Welsh side Dragons in Thomond Park and made his first start for the province in their 33–23 win against Cardiff Blues on 2 November 2019.

Knox has since been promoted to the senior squad after just 8 appearances for the Province.