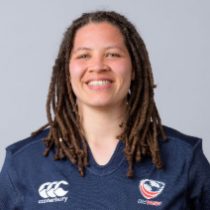 Katana Howard starting playing rugby at age 17 when a classmate in her precalculus class suggested it. Howard played softball and soccer for four years, as well as basketball for eight years and made an easy transition to rugby.

In 2013 she was named to the USA Under-20s and represented the United States on the U20s tour to England. A year later, Howard helped the Twin City Amazons make it to the semifinals of the 2014 Women's Premier League Championships.

Though Katana still seeks her first cap, she was selected to start with the U.S. Women's National Team in their historic first-ever matchup with Barbarian F.C. in April of 2019.

She was named on the bench to make her test debut against England in the 2019 Women's Rugby Super Series.