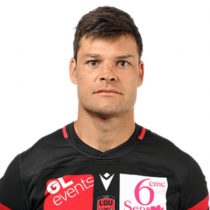 Julien Puricelli fits the cliche of being like a fine French wine becoming better with age. A mastermind of the lineout, Puricelli started his professional career in the city of his birth, Grenoble, in 2003.

He remained at the club until 2005 before joining Castres. He made almost 50 appearances for Castres before making yet another move Bayonne. The move to Bayonne came with a call up to the French test squad in 2009 where he went on to make his test debut against the All Blacks.

He earned 4 test caps for France making two starts and played his final test match that same year against the side he debut against.

Puricelli made over 130 appearances for Bayonne before making the switch to Lyon in 2014.

The hard-working flanker has become somewhat of a cult hero at Lyon and captained the side to Top14 semi-final during the 2017/18 season.

Puricelli is renowned for his exemplary lineout skills and led Lyon in their first-ever season in the Champions Cup in 2018/19.