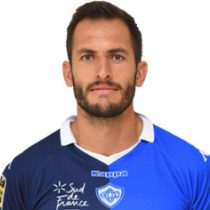 Born in Arudy, Dumora started his professional rugby career for Pau in 2006.

He represented the club on 96 occasions, scoring 171 points before leaving in 2011 to join French giants Toulon.

After one season and 6 caps, he cut ties with Toulon and signed a deal with Lyon, where he spent two seasons.

In 2014, the fullback linked up with Castres.

In September 2018, Dumora was nominated Best Player in the Top 14 for the 2017/18 season ahead of the Nuit du Rugby ceremony in France.