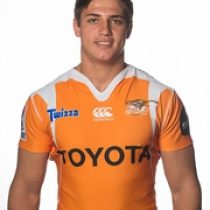 Smith was named in the Blue Bulls' squad for the 2015 Vodacom Cup, having started in twelve matches for the Blue Bulls U19 side in the 2013 Under-19 Provincial Championship.

He featured in nine of the Blue Bulls U21s' matches in the 2015 Under-21 Provincial Championship.

Smith was named in the training squad of Bloemfontein-based Super Rugby franchise the Cheetahs for the 2016 Super Rugby season.