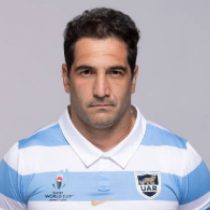 Leguizamon is one of Argentina's most established players and can play at flanker or at No.8. Leguizamon has had spells with London Irish, Stade Francias, Lyon and the Jaguares.

He made his debut for Argentina back in 2005 against Japan and he also scored that day.

The hard-hitting veteran loose forward has played at four Rugby World Cups and leaves nothing to chance on the field of play.

Having signed up with the new Argentinian franchise the Jaguares, Leguizamon lined out 5 times during the 2017 Super Rugby season.

He took his Super Rugby cap tally to 32 by the end of the 2019 Super Rugby season and was included in the Pumas World Cup squad.

After the World Cup, the veteran signed a deal to join MLR side the Seattle Seawolves.

After one season at the Seawolves, he joined MLR rivals Rugby United New York in May 2021 until the end of the 2021 season.