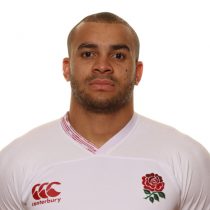 Quick and robust in defence, centre Jonathan Joseph has established himself as a key player for London Irish since his 2009 debut against Cardiff Blues in the LV=Cup. Joseph’s England debut came off the back of sterling form for London Irish and England age group sides, particularly the England U20’s, with whom he won the 2011 U20 Grand Slam.

The London Irish back came through their youth system and formed a key part of the England U20 side that came second in the 2011 Junior World Championships. At club level, his breakthrough season was in 2010-11 where he played in 13 Premiership games and scored five tries.

Joseph's remarkable rise was marked with a nomination for the Land Rover Discovery of the Season award. He failed to collect the award but he was named on England's tour to South Africa as one of 42 players to make the cut.

His huge ability was clear to see when he took to the field against the Barbarians from the bench and scored two quickfire tries.

That performance propelled him into the Test side and he was named among the replacements for the first Test against the Springboks and got a couple of minutes towards the end of the game. But that did enough to impress Stuart Lancaster and come the second Test - with Brad Barritt sidelined through injury - Joseph was named in the starting XV.

Joseph made his England debut in a June 2012 test against South Africa, and only a matter of months later, scored the first of his first England tries with a brace against the Barbarians at Twickenham. His good form continued, earning him 12 caps for England before a call-up to the English 2015 RWC squad.

Joseph was the top try-scorer in the 2015 RBS 6 Nations Championship with four, fulfilling the tantalising promise that he showed earlier in his career.

He went on to start all five games in the 2016 Grand Slam campaign, together with the victorious Old Mutual Wealth Cup match against Wales in May. At six feet tall and 14 and a half stone he is not a massive figure but he has the ability to leave any opponent flat-footed from a virtual standing start.

Joseph had a successful Autumn series scoring braces in wins over Fiji and Australia, playing in all of England’s past 15 matches - starting 13 of them.

Under Eddie Jones, Joseph has become even more prolific, he scored a hat-trick against Italy in 2016 as the Red Roses won the Grand Slam and he repeated that feat against Scotland. He also became one of very few players with a 100 per cent winning record against the All Blacks.

Joseph has showed a real nose for the try-line in his international career.

In May 2017, Bath announced that the England centre agreed long-term contract extensions until at least 2019.

He went into the 2020 Six Nations with 47 test caps and 17 tries. He had also featured 19 times in Six Nations matches.