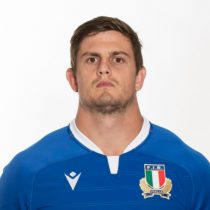 Meyer was born in Port Elizabeth, South Africa but moved to Durban where he joined the Sharks Academy.

He made his debut during the 2013 Vodacom Cup competition, making his first of 5 appearances off the bench.

Meyer was then named in the Sharks squad for the 2014 Currie Cup Premier Division competition before joining Italian side Zebre for the 2015-16 season.

Meyer has made over 30 appearances for the Parma-based franchise at the start of the 2017-18 Guinness Pro14 season.

In 2018 he earned a call up and made his debut for Italy but missed out on the 2019 RWC Squad. He was later recalled for the 2020 Six Nations.He currently has 2 caps for Italy.