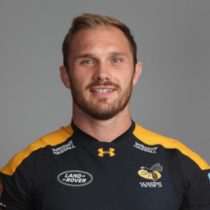 Joe Atkinson is one of many students to pass through the ranks of Loughborough Students before signing for the Pirates in 2013.
He joined London Scottish ahead of the 2016/17 season. The all action flanker, who has a eye for the tryline, heeded him well in that 2016/17 season with London Scottish.Atkinson made 50 appearances in two seasons, scoring 12 tries.
His performances were impressive enough, that In 2018, Atkinson signed for London Wasps ahead of their 2018/19 campaign.
However, that only lasted one season before he was loaned bad to London Scottish for the last game of the season.
Bedford Blues signed him for the 2019/2020 season, where he was ever-present for them.