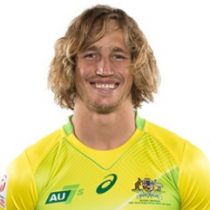 Regarded as a powerful and aggressive ball carrier, Parahi has been a reasonably regular fixture on the HSBC Sevens World Series circuit since making his debut in London in 2010, where the squad won the Cup championship.His leadership was called upon in the early stages of the 2012/13 World Series, when he filled in as captain for the injured Ed Jenkins during the Wellington, Las Vegas, Hong Kong and Tokyo rounds. Parahi was a member of the Australian Schoolboys side in 2007 and was on track to represent his country at the Under-20 level before he was sidelined by injury. He also spent time in Canberra working with the ACT Brumbies academy and playing with the Tuggeranong Vikings.

Jesse Parahi re-joined the Australian Sevens set-up in April 2016 after a short stint in the NRL with the Wests Tigers. The powerful ball-carrier was a key cog in the team that helped Australia qualify for the 2016 Rio Olympics.One of his most memorable moments in an Australian Sevens jersey was in October 2013 when he crossed over in sudden-death extra-time against South Africa in the Gold Coast Cup Semi-Finals to win the game. After returning to the Aussie Sevens squad for the inaugural 2016 Sydney Sevens tournament, Parahi continued to impress coaching staff, earning him selection at the 2016 Rio Olympics.

Parahi has been included in the Aussie 7s squad for the 2018 Rugby World Cup Sevens.