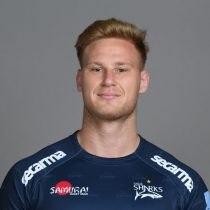 Du Preez was selected in a number of KwaZulu-Natal youth squads whilst still at school. At primary school level, he was selected for their squad that played at the 2008 Under-13 Craven Week competition.

In 2014, he was included in the South Africa Under-20 squad that played at the 2014 IRB Junior World Championship in New Zealand. He played off the bench in their 61–5 victory over Scotland and started their next match against hosts New Zealand, helping South Africa to a 33–24 win.

Du Preez made his provincial first class debut on 21 March 2015, starting the match for the Sharks XV in their 53–0 victory over the Border Bulldogs in the opening match of the 2015 Vodacom Cup competition.

In May 2016, he signed a three-year contract extension with the Sharks. Du Preez was named in the South Africa A side that took on the England Saxons.

Du Preez was named in the Springbok Touring squad in October 2016 and went onto to make his international debut on 26 November against Wales in Cadiff.

In May 2017 du Preez missed out on the original Springbok squad to face France - but was called into the squad days later.

He made his first test start in the third test against France and was included in the Springbok Rugby Championship squad.

He featured regularly for the Springboks during the Rugby Championship and returned to the Sharks to help the side win the Currie Cup.

He was included in the Springboks end of year touring party but withdrew following an injury he sustained in the Currie Cup Final.

His brother Dan made his debut against France and, in doing so, made some history as it was the first time in South African rugby that two sons of a Springbok have played Test rugby.

Du Preez was unable to add to 13 test caps for the Springboks during the Rugby Championship due to injury and in November 2018 he signed a short term deal with Sale Sharks as injury cover.

He made six appearances in total for the club scoring one try before returning to Durban in January.

In July 2019, the Sharks confirmed that Jean-Luc and his brother Dan would leave the Durban-based franchise with immediate effect.

He joins Sale having made 45 appearances in Super Rugby scoring 6 tries and has represented the Springboks 13 times since his debut in 2016.