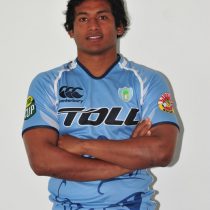 Playing Tonga 7's, Ram caught the eye of the Northland coaches who snapped him up in 2012. After a knee injury kept him out of action in 2013 he bounced back earning a Super Rugby call up by the Blues and Test call up by Tonga.

He made his international debut for Tonga in the 2015 World Rugby Pacific Nations Cup against the United States in Toronto.

He was then included in the Tongan team to the 2015 Rugby World Cup, coming off off the bench against Georgia to replace the injured captain, Nili Latu.