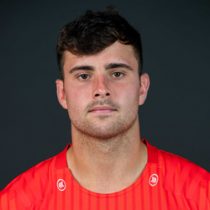 Captaining PBC to their latest Senior Cup triumph last season, the back row has a wealth of Munster and Irish experience behind him already, having first featured for the Irish U18 Schools in just fourth year, and most recently was included in the Irish U19s tour to France.

O’Sullivan has also represented Munster and U18 & U19 level, and won Junior Cup and Bowen Shield titles to go along with last year’s Senior Cup win in a glittering schools career.

Playing his club rugby for UCC RFC - O'Sullivan was included in the Ireland U20 squad for the U20 Six Nations.

He joined the Munster academy at the start of the 2017/18 season, following in the footsteps of his first cousins, brothers Niall and Rory Scannell.

He made his B&I Cup debut against Bedford Blues in December '17.

He featured in the U20s Six Nations for Ireland U20s in 2018 and was in line for the Junior World Championship only to sustain a long-term knee injury in May '18 that saw him miss out.

A year later he made his PRO14 debut against Dragons at Thomond Park in September 2019. His Champions Cup debut followed not too long after against Ospreys at Thomond Park in January 2020 and advanced to the senior squad on a three-year contract to keep him at the province until at least June 2023.