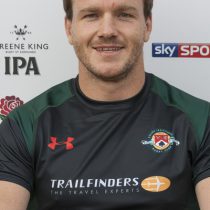 Iain Grieve represented England at u18, u19 and u21 levels during his youth.

His senior rugby has been played at Bristol Rovers, Plymouth Albion and Ealing Trailfinders, where he will spend the 2016/17 season.

His performances for the Trailfinders in the 2015/16 season earned him 12 caps, 3 tries and the Captains armband for one game. His skills were identified and the Bostwana born Grieve attended the Bristol Academy. His time at Bristol was successful and he carries that into his time at Ealing.

The 30-year old Grieve, joined Hartpury RFC from Ealing Trailfinders from the 2017-18 season, having spent the nine years with Bristol from 2005 to 2014. He also played for Plymouth Albion for a year before moving on to Ealing.