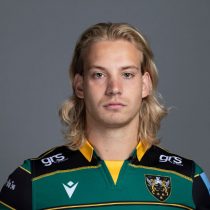 A product of the Saints Academy, Sale-born Harry made his first team debut during the 2014/15 season with his breakthrough coming during the 2015/16 campaign.

He captained England Under-18s to victory over Portugal in the FIRA/AER Championship before helping his side take the European crown with victory over Ireland in the final.

In May 2016, Harry was named in the England squad for the World Rugby Under-20 Championship and was a star performer in the tournament winning side.

April 2017 saw him become one of 15 uncapped players to be named in England's 31-man squad for their two-Test tour to Argentina in June 2017.

In October 2017, Mallinder signed a new contract extension with Northampton Saints until 2020, having made over 50 appearances for the club since his debut.

In January 2018, Mallinder became one of 8 uncapped players included in Eddie Jones' 35-man squad for the 2018 Six Nations opener against Italy.

Mallinder didn't make his debut but continued to churn out excellent performances for Northampton and made over 70 appearances for the club including 16 European caps ahead of the 2019/20 season.

February 2020 saw him sign a new deal with the Saints.