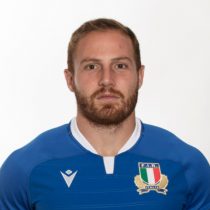 A former Italy u20 Giulio Bisegni made over 40 appearances for Lazio before going out on loan to Zebre in 2014.

He later that year joined Zebre on a full-time contract. In 2013 he was included in the Emerging Italy squad.

Bigsegni earned his first test cap in 2014 and was included in Italy's 2018 6 Nations squad, entering the tournament with 8 test caps.

He cemented his name in Italy's squad for the 2019 Rugby World Cup and entered the competition with 13 caps for the national side.