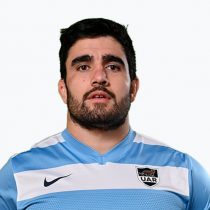 A prop forward, Nahuel began his career with La Plata and came through the Pampas system in Argentina. Before moving to France, he previously played for Los Pampas XV in South Africa´s Vodacom Cup.

He played three times for Argentina with his test debut coming in 2010 against Chile in Santiago before moving to Stade Francais for the 2011-2012 season, spending two years at the club.

Tetaz joined Newport Gwent Dragons for the 2013-2014 season, making 19 appearances for the club before making the switch to Lyon for the 2014-2015 campaign after being released by Dragons.

Nahuel went into the 2018 Rugby Championship with 21 test caps.

As of December 2020, he has made 54 appearances for his country and started the historic victory over the All Blacks and two draws with Australia in the Rugby Championship.

The same month, he signed a short-term deal with Bristol Bears.