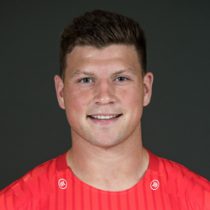 The West Cork native attended Cistercian College Roscrea, where he won a Leinster Schools Senior Cup title in 2015 and reached the final again in 2016.

The season 2015/16 saw him claim the U19 Interprovincial title with Munster and line out for Munster A against Ulster A at Naas RFC in April.

Wycherley played for the Munster U20, earning a spot in the Munster academy and was named in the Ireland squad for the U20 6 Nations tournament.

He made his B&I Cup debut against Doncaster in 2017.