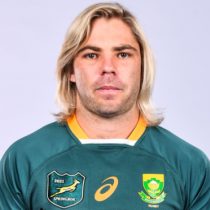 Francois "Faf" de Klerk was born in Nelspruit, South Africa and joined the Blue Bulls as a 16-year-old in 2007.

He was included in the Lions squad for the 2014 Super Rugby season and made his debut in a 21–20 victory over the Cheetahs in Bloemfontein.

Some impressive performances in the 2015 Super Rugby season led to him being included in Heyneke Meyers' 2015 extended Springbok training squad. It was his first call up into the Springbok fold.

De Klerk continued his good form as the Lions powered through the Super Rugby in 2016 and he made his Springbok debut against Ireland in 2016 and made a further 7 appearances for his country that year.

De Klerk was an instant hit at Sale and at the conclusion of the 2017/18 Premiership season, he was named the Sale Sharks Player of the Year and was voted as the Fans' Player of the Season.

He was also named in the Premiership Team of the Year and was shortlisted for the Player of the Season, he made twenty-five appearances for Sale in his first season scoring 97 points, showing exceptional skill and determination which eventually led to a call-up to the Springboks squad for the 2018 summer test series against England in South Africa. He took his test cap tally to 21 by the end of 2018 before signing a new deal with Sale Sharks which keeps him at the club until 2023.

De Klerk played a pivotal role for the Springboks in 2019 as the side won the Rugby Championship before going on to win their third World Cup in Japan later that year. He scored in the quarter-final against Japan and started all of the knockout games in the World Cup.

He won his 30th test cap in the final against England and has scored 4 tries for the Springboks. He enters the 2020/21 Premiership season with 49 caps in the competition and has scored 9 tries.

June 2021 saw de Klerk being named in South Africa's 46-man squad for the British and Irish Lions Tour. He turned out for the South Africa A team who managed a 17-13 victory over Warren Gatland's charges.