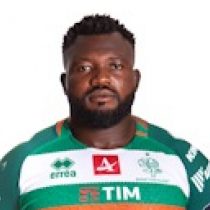 Italian prop Appiah, joined Worcester in 2015 and made his Warriors debut in the European Challenge Cup later that year.

The former Italian Under-20 international can play at loosehead or tighthead and has previously had spells with Mogliano, Rugby Parma and Modena Rugby in his homeland, and also a loan period with English National League side Cinderford.

In August 2016, he was one of three players signed by Nottingham Rugby for their 2016/17 campaign. Appiah made the move to Edinburgh on a short-term loan deal from Worcester Warriors. He has had loan spells at Nottingham and also featured for London Scottish in the RFU Championship.

Derrick joined Edinburgh Rugby on loan in February 2017, making four Pro 12 appearances during his time in the Scottish capital.

In May 2018, he signed an undisclosed contract with Benetton Rugby.

As of December 2019, he has made 22 appearances for Benetton and has scored 5 points.