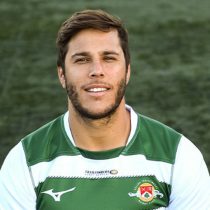 Educated at Selbourne College, Hammond played for the Border U18s before moving to Western Province in 2011.

Fine performances for Stellenbosch University, WP U19 and U21 teams earned the winger a call up for the 2012 Junior World Championships where the Baby Boks were crowned champions. 2013 saw Hammond winning the U21 Currie Cup with Western Province.

Hammond joined the Warriors Academy from South Africa's Western Province in September 2013. The explosive winger was handed his Warriors debut at the end of that month, coming on as a replacement against Wasps.

The South African youngster went on to become a first-team regular throughout the 2013/14 season, scoring his first try for the Club in the Amlin Challenge Cup against Biarritz.

He continued to progress during the 2015/16 season and scored three tries across six European Challenge Cup games, before putting pen to paper on a new deal in January 2016.

Hammond scored eight tries in 17 appearances during the 2016/17 campaign, including a hat-trick against Enisei-STM in January 2017. He made his 50th appearance for the Club against Wasps two months later.

In January 2018, English-qualified Hammond, who first arrived at Sixways from Western Province as part of the Academy in September 2013, signed a new deal with the Warriors.