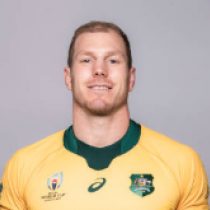 Twice nominated for the IRB Player of the Year Award, Pocock’s status as one of the game’s greats is constantly backed up by his tireless work ethic, un-coachable skill set and admirable leadership qualities. Graduating from the Anglican Church Grammar School in Brisbane in 2005, Pocock was already an aged grade Australian representative having been picked for the Aussie Schools team that year alongside his schoolmate Quade Cooper.

Since then Pocock has represented Australia at almost every level, including the World Champion Under 19 side of 2006, the Australian A’s in 2007 and the Australian Under 20’s as skipper in 2008. After taking over from George Smith as Australia’s first choice openside flanker in just second international season in 2009, the Zimbabwe-born forward quickly became one of the game’s dominant figures, earning IRB Player of the Year nominations in consecutive years, claiming the John Eales Medal in 2010 and eventually Captaining the Wallabies in 2012.

On 15 January 2015, Pocock, along with teammate Nic White, were appointed vice-captains of the Brumbies for the 2015 Super Rugby season.

May 2016 saw him sign a three-year deal with the Panasonic Wild Knights, which will see him play for the Ōta, Japan-based team for three seasons.

Pocock decided to take sabbatical leave for 6 months in 2017 and returned to action for the Wild Knights for the 2017/18 Top League season.

In 2018 the star Wallaby loose forward returned to Super Rugby with Brumbies and took his cap tally in the competition past 100.

In June he made his return to test rugby in the first June International against Ireland, that game was Pocock's 67th in the Gold and Green.

He would feature in the remaining two test against Ireland. In October 2018, he won his second John Eales Medal in his decade-long career, having previously collected the medal in 2010.

After 112 Super Rugby appearances and 19 tries scored, Pocock confirmed he will not be seeking a further contract with the Brumbies at the end of the 2019 season, and will instead reunite with the Panasonic Wild Knights in Japan.

Pocock was included in the Wallaby World Cup Squad and enters the competition with 77 test caps.