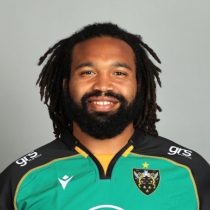 Prominent at age-grade level having lifted the Junior World Championship with England in 2013 and 2014, Danny is regarded as one of the brightest props in the country.

The loosened prop rose through the ranks of Northampton's age-group system before signing on permanently and making his senior debut in Black, Green and Gold against Dragons in the Premiership Rugby Cup in 2014.

Hobbs-Awoyemi's performances for Saints earned him international recognition – with the Northampton-born prop showcasing his talents with England Under-20s in 2013 and 2014, winning back-to-back Junior World Cup titles along the way.


After a first stint at Saints seeing Hobbs-Awoyemi make four appearances with the first team, the prop spent a period on loan at Birmingham Moseley before making the switch to Premiership rivals London Irish ahead of the 2016/17 season.

The former England age-group international loosehead joined Irish from Northampton Saints ahead of the 2016/17 season and demonstrated his strong ball-carrying ability. Helping the Exiles secure promotion back to the Premiership at the first time of asking, the double World Rugby U20 title winner re-signed for London Irish for the 2018 season.

A four year stay at Irish would see Hobbs-Awoyemi make some 50 appearances there and see the side promoted back to the Premiership before he would make the return to hometown Saints in 2020 – with the prop featuring four times for his first side that year after the restart of rugby in August.


In March 2021, he re-signed with Saints after long-term achilles injury restricted Hobbs-Awoyemi to just four appearances for Northampton since his return to Franklin’s Gardens from London Irish.