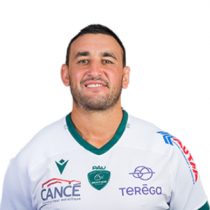 Ramsay, a Invercargill native, played for Southland, Otago, Wellington and New Zealand Maori before making the switch to France.

In 2012, Ramsay signed for Pau on an initial two-year contract with the pyrenees club.

He spent two years in the Pro D2, twice narrowly missing out on promotion before winning the second-tier in (14/15) season.

The New Zealander is contracted with the club until the end of the 2017-18 season.