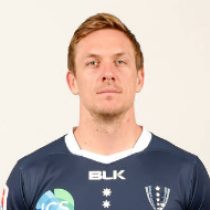 Haylett-Petty is an exceptionally talented player who is adept across the back three and has an array of skills ranging from his powerful boot to his keen eye for a gap in the opposition's defence.

Born in Durban, South Africa, he was schooled in Australia where he played Australia A Schoolboys, Australia 7's & Australia U20's.

Having played his club rugby in France, Japan and in Australia, Haylett-Petty lead the Western Force Running Meters (1017), Tackle Busts (48) & Offloads (17) during the 2015 Super Rugby season.

He followed that up with a superb 2016 Super Rugby campaign that earned him a Wallaby call-up in June 2016. He made his international debut against England in the 1st Test on the right-wing.

He was included in the Wallabies 2017 June Test series squad and started all three of the Wallabies Tests against Fiji, Scotland and Italy.

He took his Super Rugby caps total, with the Force, to 52 during the 2017 season and was initially included in the Wallabies Rugby Championship squad and played in the Wallabies 2nd Bledisloe Cup match before a bicep injury ruled him out for the remainder of the 2017 international season.

In November the Rebels confirmed that Dane and younger brother Ross had signed with the Super Rugby side following the axing of the Western Force from the competition.

The pair signed two-year deals with the Melbourne Rebels.

Haylett-Petty returned to the Wallabies squad ahead of the 2018 June Tests after suffering a season-ending injury in 2017.

He made 10 appearances for his new side during the 2018 Super Rugby season scoring 5 tries.

Following selection for the 2019 Wallaby World Cup Squad, he had 32 international appearances.

The speedy winger played in all four matches at his first World Cup, but did not play in Australia's quarter-final loss to England.