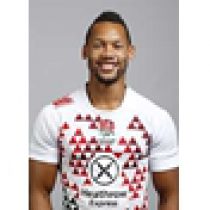 A spectacular spree of 52 tries, an England record, in the IRB 2012-13 World Series swept Dan Norton, the top touchdown maker in the tournament last season, into second place behind Ben Gollings (220) in the list of England’s all-time top scorers.

With four at the Las Vegas event in January this year and three in the subsequent tournament in Wellington, he has increased his total to150 overall. A product of Hartpury College, he was previously educated at Brockworth Enterprise and began playing when eight at Spartans RFC.

Dan represented Gloucestershire U16 and U18, South West U18 and became a member of the England U20 Grand Slam winning side.

He then played the start of the 2009-2010 for Bristol and soon established himself as top scorer and "the best winger in the league," as Bristol reached the Championship play-off final in 2010, going on to win the British & Irish Cup in 2011.

Norton was included in the squad to represent Great Britain in the 2016 Summer Olympics in Rio.