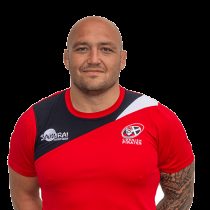 26 year old born in Neath, Mitchell was first introduced into the Welsh set up by coach Warren Gatland in the summer of 2009 as a specialist tighthead.

The former Osprey made to move to Cardiff from the Exeter Chiefs in 2014 and he brings a wealth of experience to a young Cardiff side.

Mitchell was released from the Dragons at the end of the 2016/17 season before joining Yorkshire Carnegie for whom, following recovery from an injury, he made six appearances near the end of the 2017-18 campaign.

A short-term deal then saw him move briefly to Newcastle Falcons for the start of the 2018-19 season, and then it was back to Yorkshire Carnegie until June 2019, when joined the Cornish Pirates.

Unfortunately injured throughout the 2021 period of what was a shortened Greene King IPA Championship season, the Cornish Pirates’ prop, aged 35, decided to call time on his playing career.