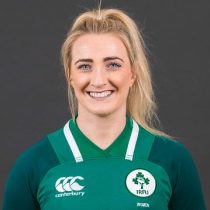 Second Row Cooney studies in I.T Carlow and plays her club rugby with Railway Union, having previously played for Tullow. She made her debut for her country in Ireland’s first ever Autumn International against England in November 2015.

Ciara was named in the Ireland squad for the 2017 6 Nations, where she won her 7th cap for Ireland.

In January 2019, she was named in the Ireland Women squad for the 2019 Six Nations tournament.

Cooney has once again been named for the Ireland squad ahead of the Women's 2020 Six Nations. She has had 10 appearances and looks to add to this total.