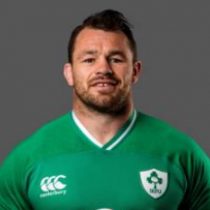 Healy began his career at Clontarf RFC where his impressive form saw him progress through the Leinster age-group system before making his senior Leinster bow in 2007. Healy added to his Irish School Boy honours and played in and won the 2009 Churchill Cup, as Ireland A comprehensively defeated England in the final.

Healy was called up to the Irish Six Nations squad in 2008. 2009 proved to be a seminal year in Healy’s career; he was involved in Leinster’s Heineken Cup victory over Leicester Tigers and he also earned his first Irish cap that year, as he played against Australia at Croke Park.

Healy has become an integral part of Ireland’s squad since his debut, and was named man-of-the-match against Australia in the 2011 World Cup, a team he clearly likes playing against. Healy is now in a position to claim with some justification to be one of the top 3 loose-head props in the world. Healy has always been a devastating ball-carrier but recent seasons have seen him also hone his technique at scrum time.

The former Belvedere College pupil can also point to a high tackle count at the business end of both club and international rugby. In 2013 he was selected to tour with the British and Irish Lions, but his tour was devastatingly cut short, due to an ankle injury sustained in only the second match of the tour against the Western Force.

Despite being injured for much of the 2014/15 season, Healy passed a late fitness test to be named in the 31-man Ireland squad fro the 2015 Rugby World Cup.

In February 2016, Healy signed a 3-year contract extension with Leinster. He unfortunately missed the summer tour to South Africa with Ireland due to injury.

A career highlight was him coming on for the last 20 minutes of the momentous victory against New Zealand in Chicago.

Healy is starting to show a return to form following a series of neck and knee injuries, well regarded for his dominant scrummaging, work rate and ball carrying ability, Healy has lost his starting role to fellow Leinster man Jack McGrath, but will be looking to hit the previous heights that made him one of the best props in the game.

Healy was included in Ireland's squad to tour Australia after a successful season with Leinster that saw his side win the Champions Cup and Pro14 title.

The Leinster legend went into the 2018/19 season with 81 test caps for his country as well as 191 appearances and 22 tries for his province.

As of November 2019, Healy has made 209 appearances for Leinster.

He heads into the 2019 Champions Cup with 79 appearances in the tournament and 50 points scored.

Healy has been named for the Six Nations 2020 Ireland squad and has 95 caps.