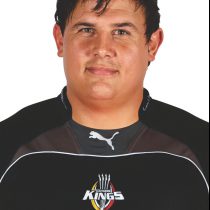 Able to play on both sides of the scrum, du Plessis started his rugby with the Lions at U18, U19 and U21 teams before getting his first senior cap for the Lions in the 2008 Vodacom. A short stint with Falcons in 2009 saw Charl moving to the Boland in 2010 where he played two Currie Cup seasons until he signed with the EP Kings in 2012. 2013 saw the prop getting his Super Rugby debut for the Southern Kings.