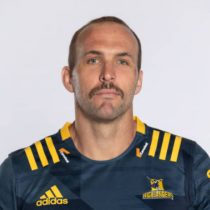 Stints at the Hurricanes and the Blues followed and in 2009 the towering second-row earned a call up to the All Blacks squad to take on France. In the summer of 2011, Evans signed a contract with London Irish in the English Premiership.

Before the start of the 2015 season, Evans signed a deal with the Sale Sharks, which he renewed in July 2016, committing with the side for a further three years until 2019.

He is still currently with Sale, for whom he has been capped 77 times.

He also has earned 2 All Black caps.