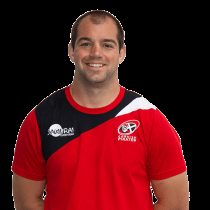 Beukeboom played his rugby at the Cornish Pirates in England in 2015/16 after impressing at Plymouth Albion and made massive leaps as a lock forward over a couple of seasons.

A powerful tight forward, Beukeboom represented Canada at the U20 Junior World Championship in Japan in 2009 and at the Junior World Trophy in Moscow in 2010.

He received his first senior cap on June 9, 2012 and was a member of the national squad ever since. In 2015 he was selected to represent Canada at the Rugby World Cup in England.

Making his debut for the Pirates immediately after the 2015 Rugby World Cup, Brett became an ever-present in the side before his season came to a halt when suffering a knee injury.

Following his return from injury, Beukeboom became a stand-out player for Cornish and Canada.

Brett made 42 appearances during his two seasons with the Pirates. He signed a two-year deal with the Pirates from the 2017/18 season before being confirmed as the club's captain ahead of the 2018/19 season.

In March 2020 he decided to hang up his boots and announced his retirement from the game.