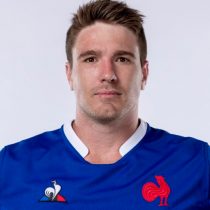 The South African born flank's French career began quite unexpectedly. He was playing for second division teams Boland and Border Bulldogs, who both fared poorly in their competitions, before receiving an unexpected call from Racing Metro who offered him a short-term medical joker contract.

His performances impressed and he was soon offered a long-term contract with the club. Le Roux made his international debut against New Zealand in Christchurch in June 2013. He made his RBS 6 Nations debut against England in the first round of 2014, then played the following game against Italy but sustained a head injury that ruled him out of the rest of the tournament.

He was then included in the French squad 2015 Six Nations Championship, where he amassed a further 4 caps.

Impressing in these displays, and constantly improving for club side Racing, Le Roux was named in the French squad for the 2015 Rugby World Cup in England. Played all five games at RWC2015 including a first start in the second row against Romania, all his other starts being at No.7.

Having played only one match in the 2016 Six Nations, the South African-born flanker was called up to the France squad to replace Raphael Lakafia ahead of the 2017 Six Nations opener against England.

Le Roux was included in the France squad to face South Africa in a three-match series. In June 2017, the then 27-test capped France international signed a new contract with Racing until 2022.

The powerful flanker was not initially selected in France's 2018 Six Nations squad but was later called into the squad making two appearances.

Le Roux was a key figure in Racing 92's journey towards the 2017/18 Champions Cup final.

He represented France for in the 2019 Rugby World Cup, starting in the game against the USA.