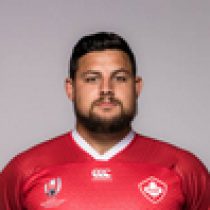 Hooker Benoit Piffero plies his trade in France with club side Issoire. Piffero represented Canada in the 2015 Rugby World Cup and looks on course to represent his country again in Japan.

He has 22 test caps to his name and featured in one World Cup match against Fiji in the starting line up.

He has been included in Canada's 2019 Pacific Nations Cup squad.