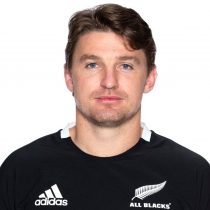 Blessed with devastating speed, a laser-like boot, and smart game management, Beauden Barrett followed in his father's footsteps to become one of New Zealand's brightest young stars and has cemented himself as one of the greats.

After a decorated junior career that saw him win the IRB Junior World Championship, Barrett made his provincial debut for Taranaki in 2010 at 19 years old and Super Rugby debut for the Hurricanes in the following season joined the ranks of the Hurricanes.

Blessed with great pace, and an eye for a gap, the electric fly-half also possesses a great rugby mind, showing on numerous occasions the ability to orchestrate and control a game. After a string of impressive performances in the Super Rugby competition, Barrett joined up with the All Blacks senior squad, making his debut in the victory over Ireland in 2012.

Barrett was included in the New Zealand squads in 2015 and went on to win the World Cup. He went on to feature in six RWC 2015 matches, scoring 26 points, including a fantastic try in the Final. He quickly established himself as one of the Hurricanes' key players and has set numerous records for the side, and also helped lead the team to its first Super Rugby title in 2016.

In November 2016, Beauden was named World Rugby Player of the Year 2016, following his impressive performances for the Hurricanes and the All Blacks. The attack-minded player, equally at home at fly-half or full-back, has scored seven tries in 2016 with defences often left flat-footed by his step and turn of pace.

Beauden's two younger brothers Scott and Jordie have also gone on to represent New Zealand and in doing so the Barrett family were the first to have three siblings selected for the same All Blacks squad. He captained the All Blacks against the Barbarians on the 2017 Northern Tour. His career in black also included a stint with the All Blacks Sevens as a teenager in 2010, and the 2011 New Zealand Under 20 side.

In the second test against the Wallabies, Barrett put in a performance that has been tipped as one of the finest performances by an All Black and has been compared to that of Dan Carter's against the British and Irish Lions. He scored 4 tries and 5 conversions as the All Blacks beat the Wallabies 40-12 at Eden Park.

Barrett's 2018 end-of-year tour saw him surpass Dan Carter as the most prolific try-scorer to ever play at first-five, as he scored the 31st of his career in the third Bledisloe Cup test, against the Wallabies, off a pass from Rieko Ioane, during a 37-20 win.

In June 2019 against the Bulls, Barrett and Perenara were played their 100th match together as a halfback pairing. Barrett, who has scored a record 1244 points for the Hurricanes since his debut in 2011, announced that he had signed with New Zealand Rugby for four more years but would move to the Blues to play in the Super Rugby competition. He made 125 appearances for the Hurricanes, fourth only to TJ Perenara, Ma'a Nonu and Conrad Smith.

In July 2020, it was confirmed that Barrett would move to Suntory Sungoliath for the 2021 Top League season and would return to the Blues thereafter until 2023 and will be available to the All Blacks during the 2021 test season.