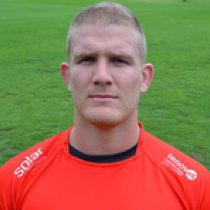 2016 was Maddison's first season with Welsh, scoring one try in 13 matches since joining from Rotherham Titans.

He featured in both matches between Titans and Ealing Trailfinders in 2015-16 and captained the Yorkshire outfit at Vallis Way.

December 2016 saw him sing an 18-month deal with Ealing Trailfinders in the Greene King IPA Championship, with the lock managing 1 try from 12 appearances in that time.