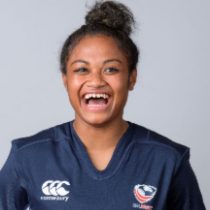 Daughter of World Rugby Hall of Fame Legend Waisale Serevi (Fiji), Asinate grew up around rugby and began playing for Seattle when she moved to the U.S. from Fiji. Also a volleyball and basketball player in middle and high school, Serevi played for the USA Under-20s and Collegiate All-Americans in 7s and 15s, along with a number of Falcons level tournaments in sevens.

Serevi earned her first cap with the U.S. Women's National Team in 15s in 2016 against rival-Canada.

She earned her degree in Law and Justice from Central Washington University.

Serevi can play centre as well as in the back row.