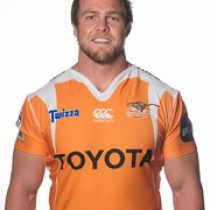 Koster is a South African lock and flank that has played Varsity Cup rugby for Shimlas and Currie Cup for Griffons and Cheethas.

He made his Super Rugby debut in 2016 and has gone on to become a pivotal part of the Cheetahs scrum following the departure of Lood de Jager and has made 10 appearances for the Cheetahs this season.

In July 2017, Grenoble confirmed the signing of signed Koster on a two-year deal until at least 2019.