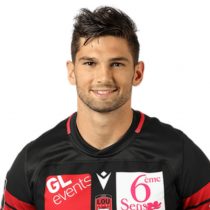 Xavier Mignot is the son of Laurent Mignot, who was for a long-time director of the CS Bourgoin-Jallieu Academy before becoming a coach.

Mignot is an impressive talent and kicked off his professional career at Grenoble in 2014, joing from CS Bourgoin-Jallieu.

He also represented the France U20s, playing four games in the 2014 Six Nations Under-20, helping the side claim a Grand Slam and went onto play five games at the 2014 U-20 World Cup.

By 2016, Mignot was a regular in the Grenoble starting line up and was called up to the France senior squad during the 2016 Autumn Internationals.

He started on his test debut against Argentina in Tucuman.

Injuries have hampered Mignot's development but is stilled viewed as a key player for Lyon.