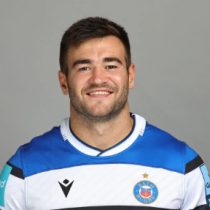 Muir originally caught the eye of the national set-up while playing for Northumbria University in the BUCS Super Rugby League. He has gone onto represent England Sevens across the globe, making his senior bow at the Assupol International Sevens tournament in South Africa.

His impressive performances led to a call-up to Simon Amor’s 2018 Rugby World Cup Sevens squad in San Francisco before joining the programme full time for the 2018-19 World Rugby Sevens campaign.

Muir took home the 2019 England Sevens Player of the Year at the Rugby Players’ Association Awards in 2019 – the first player to win the award in their first season of England Sevens.