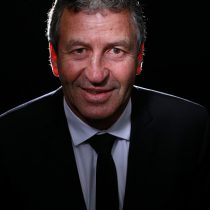 Born in the Waikato town of Putaruru, Wayne Ross Smith trained as a teacher and moved to Christchurch to further his study and his rugby career. A sharp, running first five-eighth, he made his debut for Canterbury in 1979 and went on to play 69 games through until 1985 in what was a golden era for the province. He made his All Blacks Test debut in 1980 against Australia and went on to play 35 games, including 17 Tests, over six years.

He also played for and captained the New Zealand Sevens team. After a stint playing and coaching overseas, he returned to New Zealand and into full-time coaching. He coached the Crusaders to back-to-back Super Rugby championship titles in 1998 and 1999 and was also Assistant Coach of the All Blacks. He became All Blacks Head Coach for the 2000 and 2001 seasons before he resigned and headed overseas to coach English club Northampton Saints.

He returned to the All Blacks in 2004, working alongside Head Coach Sir Graham Henry and Steve Hansen, helping coach the team to numerous victories, including the Rugby World Cup in 2011. He was made a Companion of the New Zealand Order of Merit (CNZM) in 2012. The same year he became an Assistant Coach with the Chiefs Super Rugby team, helping the team to back-to-back titles in 2012 and 2013. He returned to the All Blacks for the victorious Rugby World Cup campaign in 2015.

In May 2019 Smith announced his retirement from professional coaching, he is set to retire following the conclusion of the 2019 Rugby Championship and took up a Director of Rugby role at Kobelco Steelers in Japan