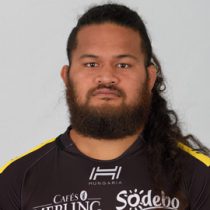 Pelo is a loosehead a prop who is currently playing for La Rochelle in the French Top 14.

He made his French international debut coming off the bench against Wales in the 2016 Six Nations Championship.

He has previously played for Bourgoin & Montpellier.

After 3 seasons at La Rochelle, Pelo signed a deal that would keep him at the club until at least June 2021.

As of September 2020, he has made 96 appearances for the French side and has scored 15 points.