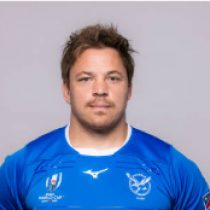 A hooker that can play on the side of the scrum too, van Jaarsveld, started his career at the Falcons before spending 5 years at the Pumas. In 2014 he moved to the Cheetahs where he plays his Super Rugby and captains their Currie Cup team. He will represent Namibia at the 2015 RWC.